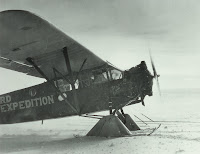 Today artifacts from Admiral Richard E. Byrd’s ship, The City of New York, go on auction in Dallas, Texas. A native Virginian, Admiral Byrd used the ship in his expedition to the Antarctic in 1928. The purpose of this trip was to make the first flight across the South Pole, which he did, in a Ford tri-motor. He also brought along the Virginia Aviation Museum’s Fairchild FC-2W2 Stars and Stripes (on loan from the National Air and Space Museum) airplane to document the expedition through aerial photography. The Stars and Stripes first flew in the Antarctic on January 15, 1929 and ten days later transmitted Morse Code while in flight over a record 10,000 miles back to New York City. When it was time to leave, the plane was stored in a snow hangar from January 1930 to December 1933.


As you can imagine, the Antarctic was very cold so Byrd and his crew had to wear fur coats and masks to keep warm. It was so cold that the men and their dogs had to live underground in the snow! The Virginia Aviation Museum has in its collection clothing from Capt. Charles L. Kessler, who was a part of this first expedition. Life in the South Pole meant wearing a sweater, mask, parka, fur coat with hood and, of course, gloves anytime one would go above ground.


Byrd and his crew returned again to the Antarctic in later expeditions, including one from 1939 to 1941. In the photo at right, a few members of his crew pose in 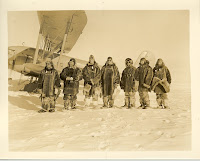 Antarctic-approved clothing with their cameras in tow. Recently rediscovered at the Virginia Aviation Museum was a collection of personal photographs from this expedition of the crew- everything from taking care of puppies that were born on the trip, to photographing the Antarctic, to making pancakes in the crew’s kitchen were well documented by one of Byrd’s team.


Even though items from the expedition are being auctioned off today, you can still see many more artifacts, including the Stars & Stripes, right here at the Virginia Aviation Museum.
Posted by Sarah Lanigan at 8:54 AM